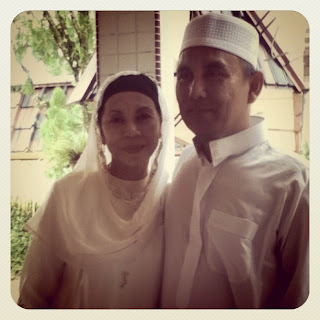 Hari Raya was an experience. After a month of daylight fasting they celebrate by eating in each other's houses. It's congestion on the roads and indigestion in the stomach for around 7 days. They eat non-stop. Taking it in turns to host. Visiting family members they only see at this time of the year, and then seeing them again and again in different houses as each does the same circuit. Some host with a speciality dish, others with sweets, depending on the time of day, so their is some variety.

Mokhtar and his family were our very kind hosts for four days. He lives in KL but keeps the family house here on the north east coast for these occasions. It was his grandson's christening (insert islamic word here) and he had to have a goat sacrificed. It was in the early morning so we were spared the sight. Although in the main he is at odds with this extremely conservative society. He even used to have a dog, which is frowned upon.

The people of this province have voted in an Islamic council and live without much of what they have on the West coast.

There is no alcohol allowed but there is a drugs problem and many roads have speed bumps to stop the kids motorbike racing, as there have been many deaths. But there is little else for them to do. No bars or clubs or even cinemas.

Music is discouraged too. When I played at the Ramadan bazars I would have been the first time some people had heard live music.

The religious leaders believe that this life should be a preparation for the next and free from all distractions.

When we were busking, a few times, those dressed like priests would come and stare at us for a long time, circling, thinking, and then put money in the hat.

It made me think about coming back next year with a band on the back of a flatbed truck and put on a real show, touring the circuit of bazars. The hotels are empty this time of year. It would need a bit of sponsorship to cover the costs. Maybe if I did it officially it would cause problems though.

The idea of travelling with a band and a truck with a sound system appeals to me though. Playing shows for the people who are without. Busking goes part of the way but a band is a show.