The legend of Janet Varney (ft. Frances Luke Accord) 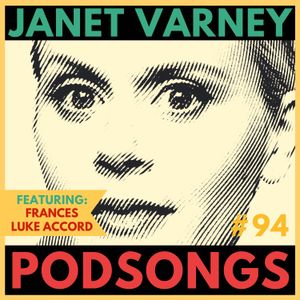 Janet Varney is an Emmy-Nominated actor, comedian, writer and producer. In the animation world, she is lucky enough to be the award-winning voice of Korra on Nickelodeon’s critically-acclaimed standout hit “The Legend of Korra,” a role for which she continues to be invited to comic cons to give sweaty handshakes the world over. She can also be seen as the entitled and bitchy Becca on FX’s (via hulu) “You’re the Worst” (named as one of the last decade’s best comedies), and fighting dark forces alongside John C. McGinley as Evie Barrett on IFC’s (via hulu) “Stan Against Evil.”

Her own podcast on the Max Fun network, The JV Club with Janet Varney, has been going since 2012 and features almost 400 interviews with celebrities about their awkward teenage years. She co-programs comedy for Outside Lands music festival and is co-founder/creative director/producer of one of the largest and most acclaimed comedy festivals in North America, SF Sketchfest: the San Francisco Comedy Festival, now in its 20th year. http://janetvarney.com/

When Nicholas Gunty and Brian Powers put their songs and their voices together, there is a delicate magic that commands the room to attention. The duo is known as Frances Luke Accord, and they are what NPR's Mountain Stage calls “the definition of lean-in music.” Their soft, contemplative vintage of indie-folk gestures toward a timelessness that honors the Simon & Garfunkel comparisons but pushes beyond into the world of Bon Iver, Jose Gonzalez, and progressive folk music.   Both raised in South Bend, IN, Gunty and Powers met and began performing together during their time at the University of Notre Dame.

Their first release, 'Kandote', was an intercultural collaboration with the Barefoot Truth Children’s Choir in Uganda, a not-for-profit effort which provides ongoing support to the choir to this day. Relocating to Chicago in 2013, the duo honed their songwriting craft while releasing two more self-produced EPs, laying the groundwork for their breakthrough debut LP, 'Fluke'. This immersive, philosophically rich album set them off on their first national tour, which included support dates with Anais Mitchell, Darlingside, and The Ballroom Thieves.  The duo's 2021 release, the Sunnyside EP, offers a glimpse into the larger body of work Frances Luke Accord have been developing over the course of the pandemic. More to come soon. https://franceslukeaccord.com/

Hands that work, hands that tire
We form the shape but the shape expires

We all need shape

As long as you’re by my side
Will you make me laugh in the afterlife?
Long as our long dark night
You can lead me on to the morning light