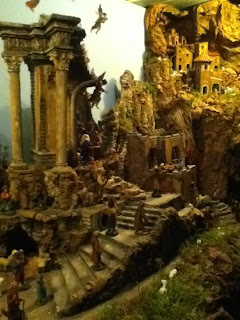 Season's greetings to everyone around the world! It's been an amazing year. I met amazing people and have enough memories to last me a lifetime. Thank you to you all!

I'm in the south of Italy near Salerno with Maria and her family for a real Italian Christmas. The sun is shining, the pasta is bright and the pope is on TV. They're mad for the nativity here. Every house has a scale model of the Jesus and Mary show. I was in Napoli a few days ago and there's a whole street that sells just nativity kits. It's a real industry.

It's nice to kick back and take a break from travel and music. After the last show in Germany I went via Amsterdam to Gent to watch the 6-day cycling for my father's 65th. Then lost my passport in Brussels (travel stamps and all) and had to go back to England to get a new one. Then Salerno for a week, Amsterdam for a week, and then back here. It's to england on Wednesday for another Christmas (my brother's back from Austin with his family to) and new year.

Next year I have zero planned, which is a great feeling. Just the chance to explore the interests I've collected on my travels. There's a new Buddhist temple in Rome with a retreat going on so I can sit still there for a week. Whatever makes you happy hey ;)

And I've found an Ayurvedic doctor in Rome where I can get a Panchakarma for another week. It's expensive but worth it. I have become obsessed with ayurveda and spend all my time reading textbooks about it. It's like discovering the musical scales of life when before I'd been tapping random keys.